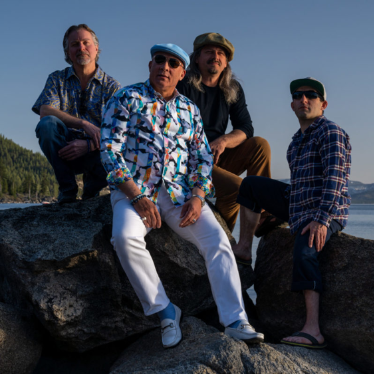 Minneapolis-grown guitar player Rhys Alexander plays his axe everywhere — both upfront and in the background – from funky beats and driving rock to cool jazz. Having graduated from Prince’s alma mater, Central High School, he’s been a South Lake Tahoe resident since 2013.  A co-founder of Moons of Jupiter, Rhys designed and built Strata Studio in Tahoe Paradise, where the group records.

When it comes to music, food, and the outdoors, Brett Aaron Kendall gets down on all things local. A Lake Tahoe resident since he was 13, Brett discovered his gift for the culinary arts at age 16, thus beginning a life-long interest in the sustainable food movement. He and wife Jennie co-founded FOLK Brewing Company in 2014, creating Original Lake Tahoe Kombucha, a line of authentic, slow-brewed, single-barrel libations. In their spare time, the couple enjoy exploring the Lake and playing frisbee golf with their two dogs, whom they call the Fuzzy Explorers. (And no, the dogs do not have their own jazz band.)

Myke Smith laid his drum sticks down when his high school band leader told him, “No more drummers! Take your pick,” he said, “the trumpet or the saxophone.” Smith has been blowing blue notes out of his alto sax ever since. His influences run the gamit, from Cannonball Adderly and Grover Washington, Jr., to Gerald Albright, Kirk Whalum, and Kenny G. He favors the sounds that float down the streets of Memphis where he was born and honed his musical talents, playing with renowned musicians there, DuWayne Burnside and Albert King, Jr.

The Moons of Jupiter co-founder also is the band’s lead singer. That twinkle in his eye comes from serenading wife Maggie with sexy jazz melodies.